WHICH IS SOUTH AFRICA’S GREATEST INVENTION?

Get updates and learn from the best 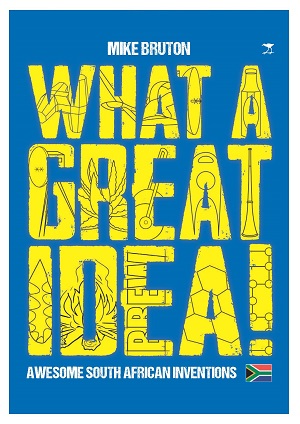 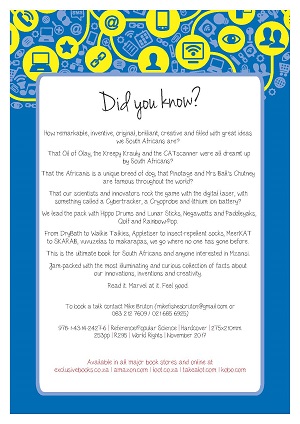 The book is arranged in 29 chapters, with an Introduction by the Minister, the honorable Naledi Pandor, and two introductory essays on ‘Africa: the Bright Continent’ and ‘The Importance of Ideas’. There are then 24 chapters on inventions in a wide range of fields, including Food & Cooking, Home & Garden, Agriculture & Rural Living, Health & Grooming, Music, Craft & Entertainment, Sport & Recreation, Radio & Radar, Communications, Electronics & Computers, Commerce & Fintech, City Planning, Industry & Mining, Transport, Military & Security, Energy, Environmental Management, Fisheries, and Space Science & Astronomy. The book ends with notes on our innovation infrastructure and on ‘How to become a great inventor’, and an essay on ‘The Value of Inventions’. There is also a comprehensive Reference & Reading List and Index.

Want to know who invented Eina Ivy, Mxit, the Cryoprobe, CAT scanner, Xho-Pera, Marie biscuits, Reel Gardening, iStyla, the first bed, Shosholoza gum boots, SASSI, Cybertracker, Eish! chili sauce, Qolf, Woocommerce, the Vuvuzela or the Makarapa, then get this book! Or perhaps you want to develop a better understanding of the gig economy, inclusive design, the threat of robots, the triple bottom line, the role of disruption, the impact of millennials, the Fourth Industrial Revolution, or the importance of bad ideas – you know where to go!

Exploring SweepSouth’s Pivot in COVID-19 with Aisha Pandor COVID 19 became a pivotal force for us all. Entrepreneurs need to pivot, create, change and survive